Plant Rant: Which Texas Sage is it Really?

I have to have a bit of a horticultural temper tantrum this morning, which has to do with plant labeling...or rather incorrect plant labeling. Plant imposters, if you will. When you're planting blooming shrubs, it can take a years for plants to establish and begin to fill in to a more mature growth habit and size. So it's pretty frustrating after all that time only to end up with the wrong plant species. Such is the saga of my Texas sage.

While there are many beautiful varieties of Texas sage, my particular favorite happens to be Leucophyllum langmaniae 'Rio Bravo'. Varieties of this species differ in growth and blooming habits from the more common Leucophyllum frutescens varieties. The former having a wider base, sprawling growth habit and heavier blooming, versus the later having a wider growth habit at the top of the plant - often developing naked knees syndrome.

About 4-5 years ago I purchased and planted 3 more specimens of what was supposed to be 'Rio Bravo' Texas sage. I have plantings of a few types of Texas sage in my front yard and the 'Rio Bravo' is always the most stunning bloomer and the pollinators adore it. Adding a few more to my hellstrip would help fill out the space and provide more color and food for insects.

Early on, I suspected something wasn't right, as the small plants began to differentiate and the foliage didn't look similar on all three. As the three plants continued to grow and become larger, it became apparent that one plants was definitely 'Rio Bravo'...but the other two? Not sure...because they never bloomed. And I mean, never bloomed. It was bizarre. After doing some research, the best I could figure was that perhaps these two non-conformers were some sort of parent species of 'Rio Bravo'...or maybe 'Lynn's Legacy'...but again, without any flowers, I couldn't be sure. I thought, ok, whatever this variety is, maybe it has a juvenility period and it needs to mature longer before it will bloom? .

It really peeves me when nurseries and garden centers get their plant labeling wrong...it has long-term and expensive consequences for the home gardener.

By now of course, the three large shrubs have grown in somewhat different forms and don't "match"...which is highly irritating. The one real 'Rio Bravo' in the bed blooms it's head off like it's supposed to...while the other two grow in a different shape and don't bloom. Which throws the entire planting off whack. And again, I was really confused as to why these two Texas sage just refused to bloom. I've spent the last three years grappling with the idea of ripping them out and starting over. Finally last year, I got the first few blooms showing up on the two non-conformers - just a hand full in late fall. While the adjacent 'Rio Bravo' was buzzing with pollinators, not a single insect would touch the flowers on the mystery plants. So..gee...is this variety photoperiodic...a short-day plant maybe...which is why it's only putting on a few flowers in fall? I've been grasping at straws here. About a week ago I committed to just ripping the now large established shrubs out this winter and starting over.

And then THIS happened two days ago, just ahead of some rainstorms that passed through (Texas sage develop flowers in response to increased humidity, changes in barometric pressure, and rainfall): 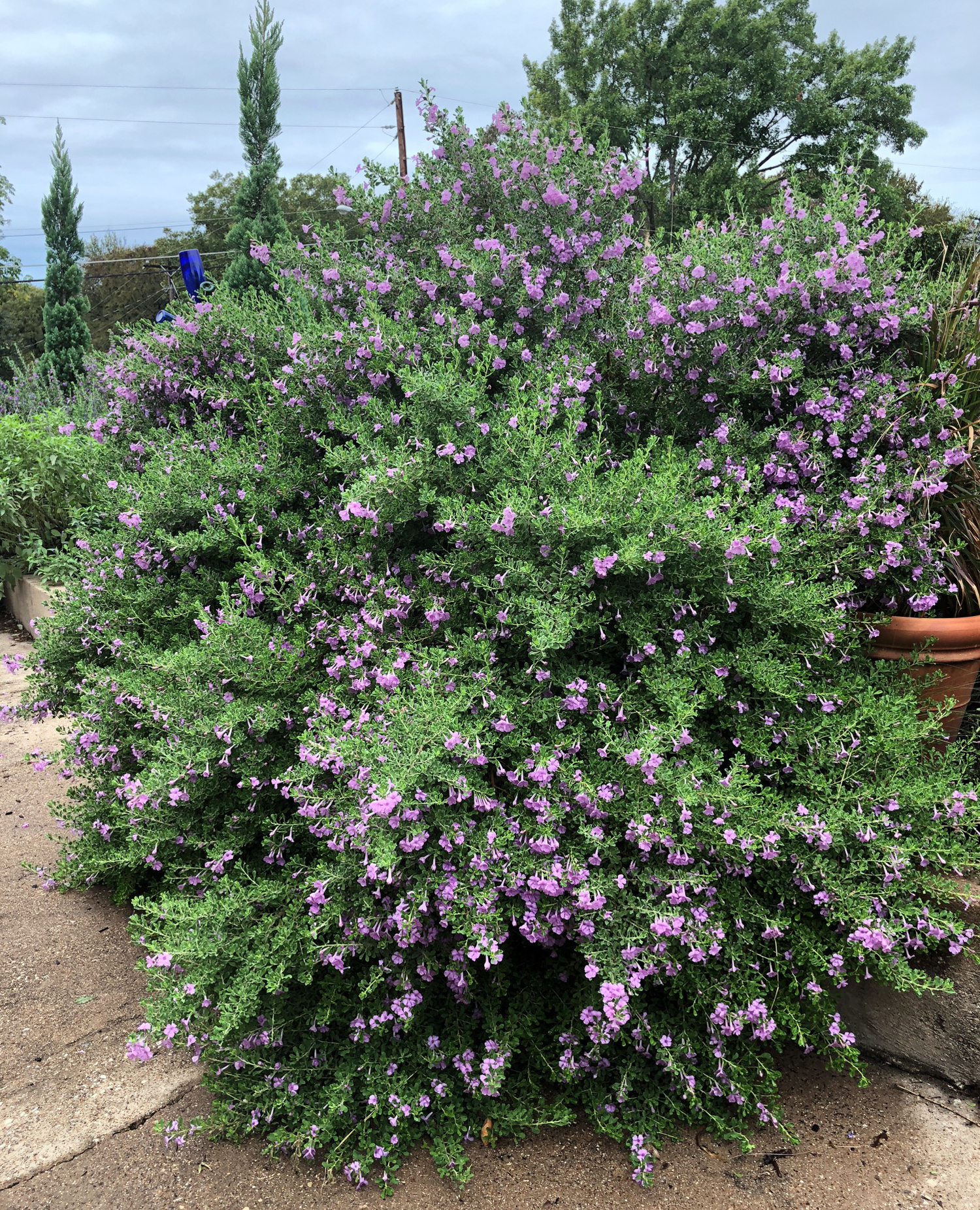 What the??!! It's like it heard me tell it I was going to rip it out...so it got to blooming in fast order! Only took 5 years. So both of these mystery plants are now in full bloom and pollinators were visiting the flowers - for the first time in my observation. Again, best I can figure these are 'Lynn's Legacy'.

The flower are a bit too pink for my taste (I prefer the deeper violet on the 'Rio Bravo')...but now that plants are actually blooming, I have to decide if they'll stay or go. Grrr.

I've noticed a few sites online that are listing this plant as 'Rio Bravo'...so beware. Alright...plant rant over, I need to go have more coffee!

Holly, welcome to the world of plant "rebranding"...it can be messy. Best I can find, 'Rio Verde' looks to be simply a relabeling by one Texas nursery of 'Rio Bravo'. So I think you're safe assuming what you really have is 'Rio Bravo' (which is also sold as 'Brave River'). 'Green Cloud' is a different species than 'Rio Bravo' and it will be wider at the top and slightly narrower at the bottom than 'Rio Bravo' - but it does have a similar look -it's a really pretty variety that I think you will like.

Well, Leslie, I finally was able to dig up my old plant tags and it turns out I've got 'Rio Verde' and 'Silver Star'! I am assuming the 'Rio Verde' is the same as 'Rio Bravo' just a different brand??? Do you think the two are the same? A google search hasn't turned up anything to clarify but photos of Rio Bravo sure look like my Rio Verde.

Today I went to Lowe's today to see if I could find more of the greener 'Rio Verde's' but I only found 'Green Cloud'. I bought one since it seems like one of the greener varieties but I'm afraid it's going to get bigger than my Rio Verde. Hmmm...

Holly - yes the leaf color is less silver, more green - as it's a different species than the more common Texas sage you're probably familiar with, which has very distinct silver foliage.

Thank you Leslie for your quick response! Well, I think it must be Rio Bravo because it has bloomed at least 20 times since I planted it. Also, the color of the leaves is different than what I was expecting. I was expecting a more ashy, silvery, grayish color but it's more green like normal shrubs. The green is maybe like that of the true sages such as lipstick sage or like a rosemary bush or oregano or thyme or other herbs. Does that sound right? It's hard to describe but just more of a saturated green than the regular silverado sages. Thank you again!

SO FRUSTRATING! Yes, it looks like I had no idea what I was doing when I planted these shrubs...because they are totally off balance and don't look the way I intended. And I'm a professional, lol.

In my experience, what I believe to be Lynn's Legacy barely blooms...it's only done what it has in my photo above twice. No joke! The Rio Bravo, on the other hand, Blooms it's head off all the time. At a glance, the Rio bravo will have a deeper violet color, whereas the other is a lighter lavender color I hope that helps!

Actually, I'm still not sure if this profuse bloomer is Rio Bravo or Lynn's Legacy. Would you please give me your opinion? This is how it looks (see attached). I planted it in 2016, probably in late spring, so it's now been in the ground for 2 years. Oh shoot! It's not letting me paste in the photo. :-(

OMG YES! The exact same thing happened to me! It's been so frustrating. I purchased 4 to line the street in front of my house and ended up with 3 of the classic Leucophyllum frutescens and one Rio Bravo in the middle which has been a real showstopper. My neighbors comment on how pretty it is but they must think I have very poor landscape design skills overall, LOL. I can't complain too much because, to be fair, I was not aware of Rio Brave so it's sort of a blessing in disguise and I'm glad that now I have one. I just hate to rip out the other 3 sages. But I will try to find somewhere else for them. Thank you for your blog post. I've been trying off and on to figure out the scientific name of that thing for 2 years so I could get more of them.

Hi Jerry - I'm not sure where you live but I purchased these Texas Sage at North Haven Gardens in Dallas, TX. Best to check with your local garden center to see what they have in stock!

Hi Leslie, Great Article! Where can I buy these two varieties and other Texas Sage varieties?