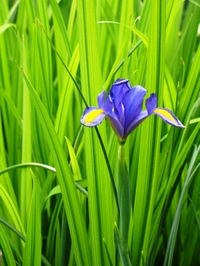 Waiting for my Dutch Irises to bloom in spring is a yearly event. They are just one of the most beautiful flowers in the garden. Its too bad they only last as long as they do, which is never long enough. This year, unfortunately, we got some very hard rains just as they were coming into bloom. They were pretty beat up and just weren't able to put on their normal show. Here is one of the last few still hanging on. But, even in their injured state...they are still beautiful. I thought the sapphire blue of the flower looked especially nice up against the yellow-green foliage of dwarf Iris pseudocorus, not yet in bloom.

However, as a consolation, as the Dutch Iris are fading, my Iris pallida is just starting to bloom. Here is the very first. Such a pretty pale blue/lavender. It was the only existing planting on the property when we bought the house. Our house was built in 1941, and this is an old fashioned Iris, so I imagine the large clump in the back yard has been here for some time. Each season, I dig up a few and transplant them to other places in the garden. It is one of my favorite Iris species. The big clump in the back yard hasn't quite started to bloom, but once it does I'll post a photo. I also have a mystery Iris. I purchased what was supposed to be 'Supersition'..a "black" iris, and ended up with  BEIGE. Now that's a color I never planned for in the garden! I wish I could say it was more peach, but it really is..Beige. But it has a very interesting pretty bloom with splashes of purple. I haven't yet taken the time to try and identify this variety, but I suppose at some point I should. 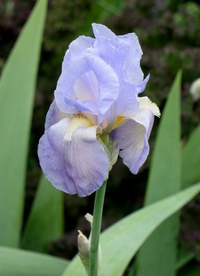 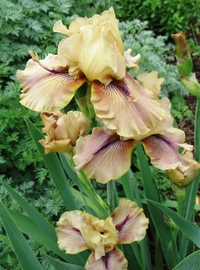